Docebo powers learning experiences for over 2,800 customers around the world.

It started with an idea

to create a learning technology that would make a real impact. In 2005, in Macherio, Italy, that idea became a reality. Since then Docebo has grown into a global company with offices all over the world, including the United States, the United Kingdom, Canada, France, Dubai and of course, Italy.

It grew into an IPO

In October of 2019, Docebo successfully launched their first IPO on the Toronto Stock Exchange (TSX: DCBO), followed by the launch of NASDAQ (NASDAQ: DCBO) in December of 2020.

It continues to grow

Championed by Claudio Erba, Founder & CEO, and our global family, Docebo is proud to be recognized as one of the industry’s fastest growing and most innovative learning technologies on the market.

We have, and always will be, dedicated to building products that help people during a challenging transition towards a better, technology-driven world.

The Docebo family has grown from a handful of people with an idea to a team of 700+ innovators across the globe. We believe learning is for everyone, and that we all have something we can learn from each other. That’s why we have built a diverse and inclusive community that appreciates one another, learns, and grows together. 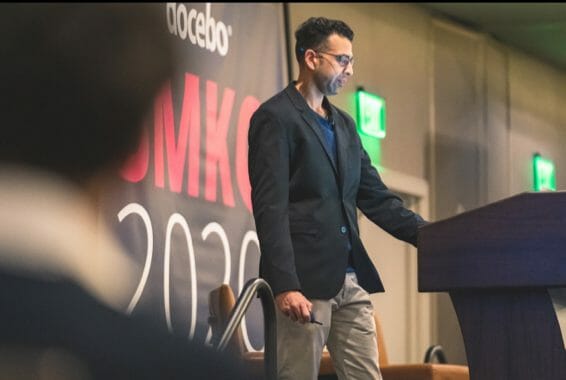 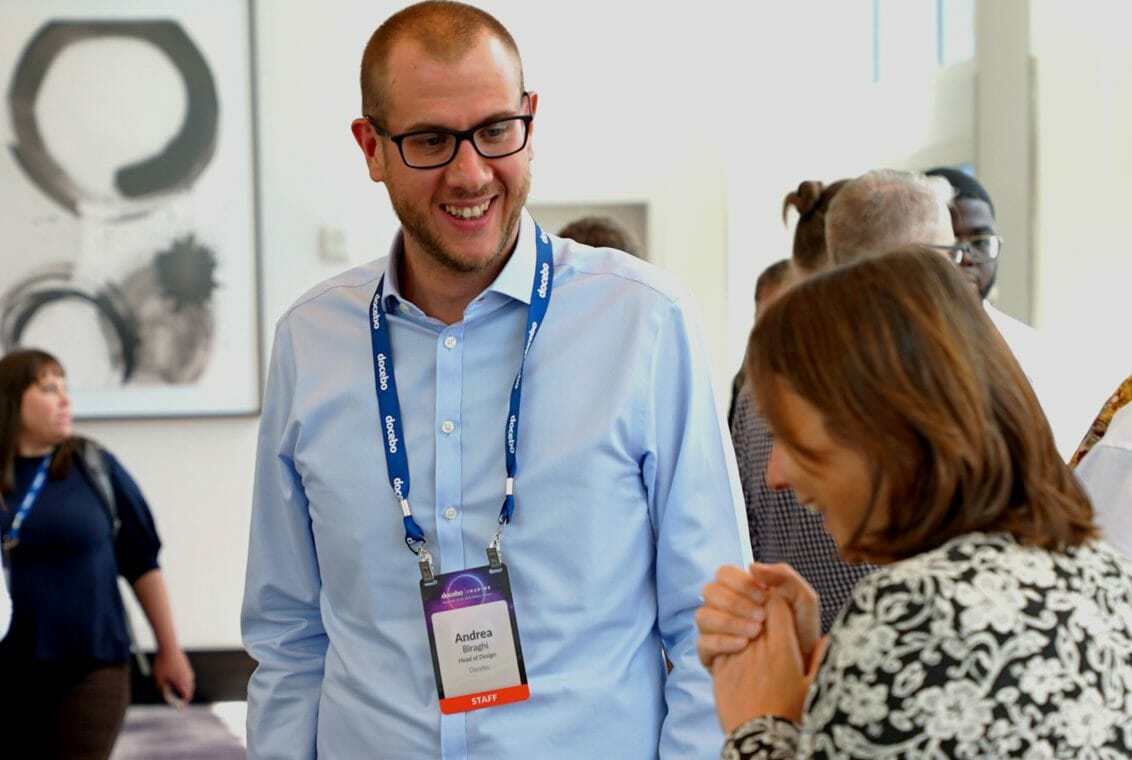 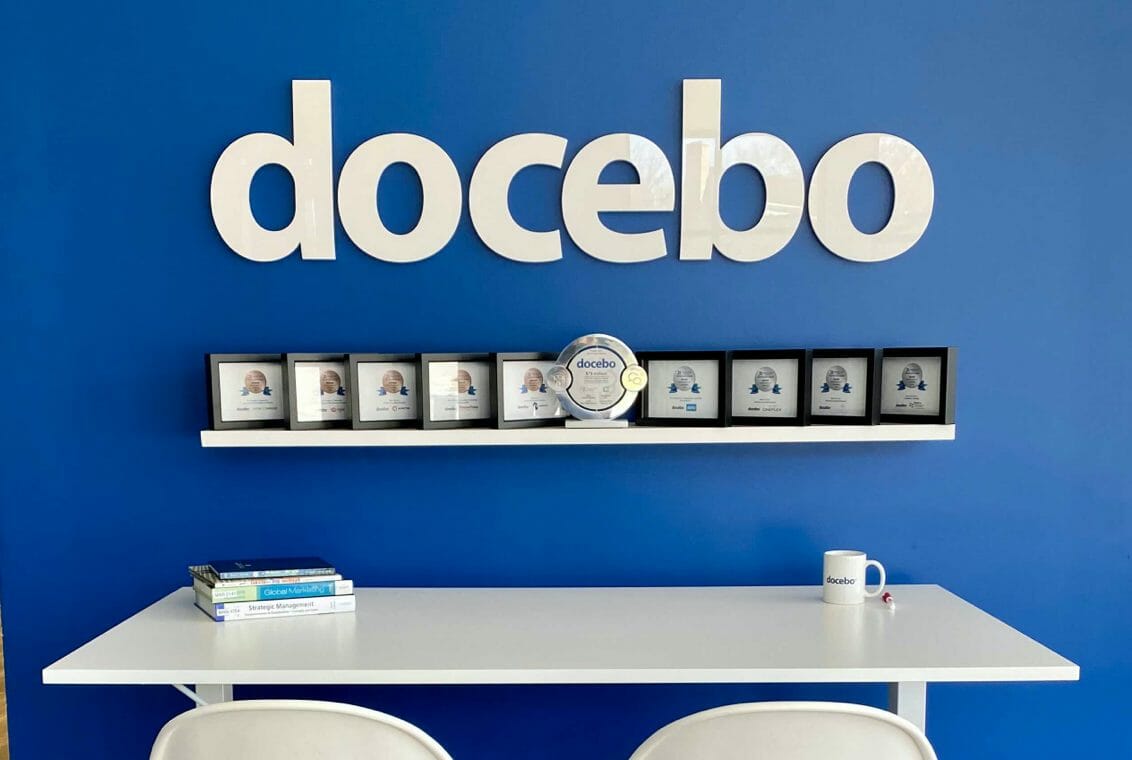 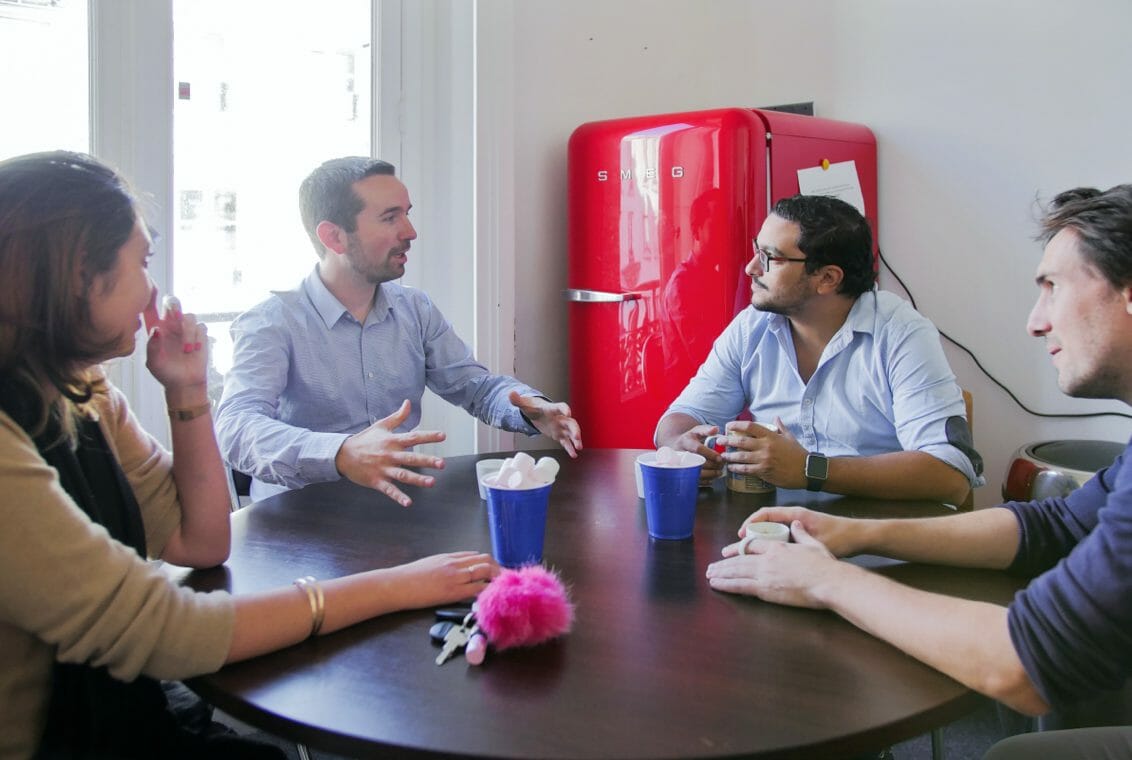 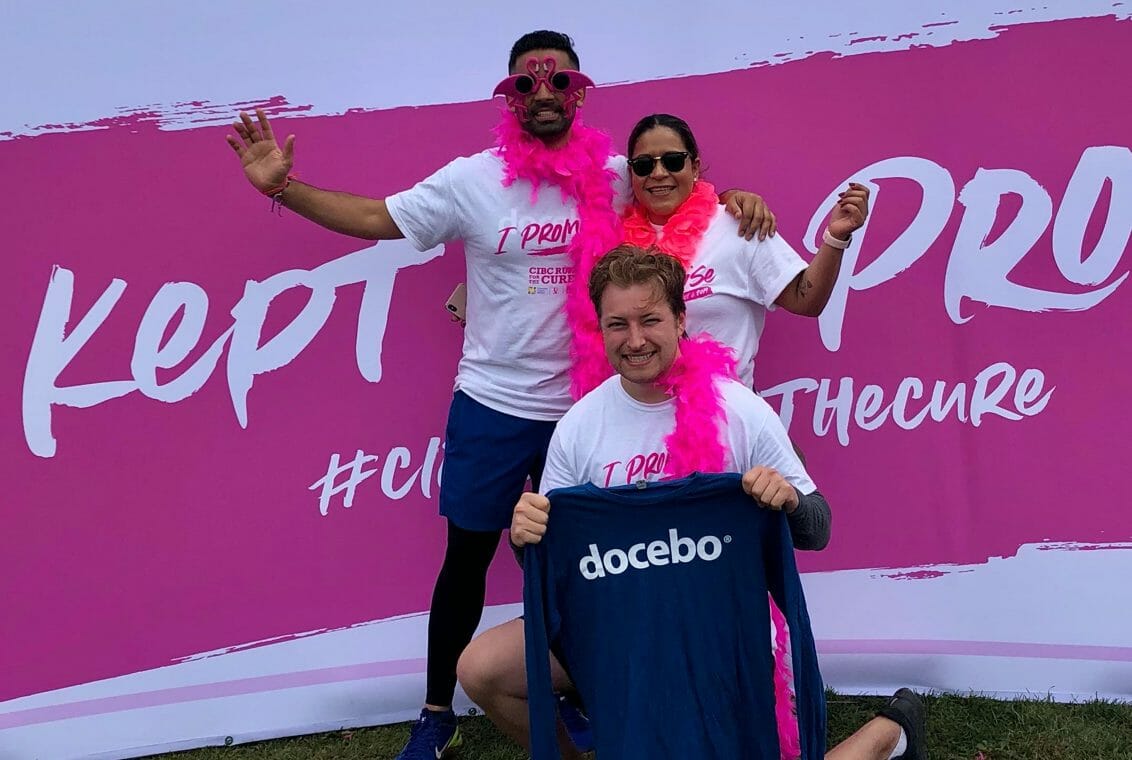 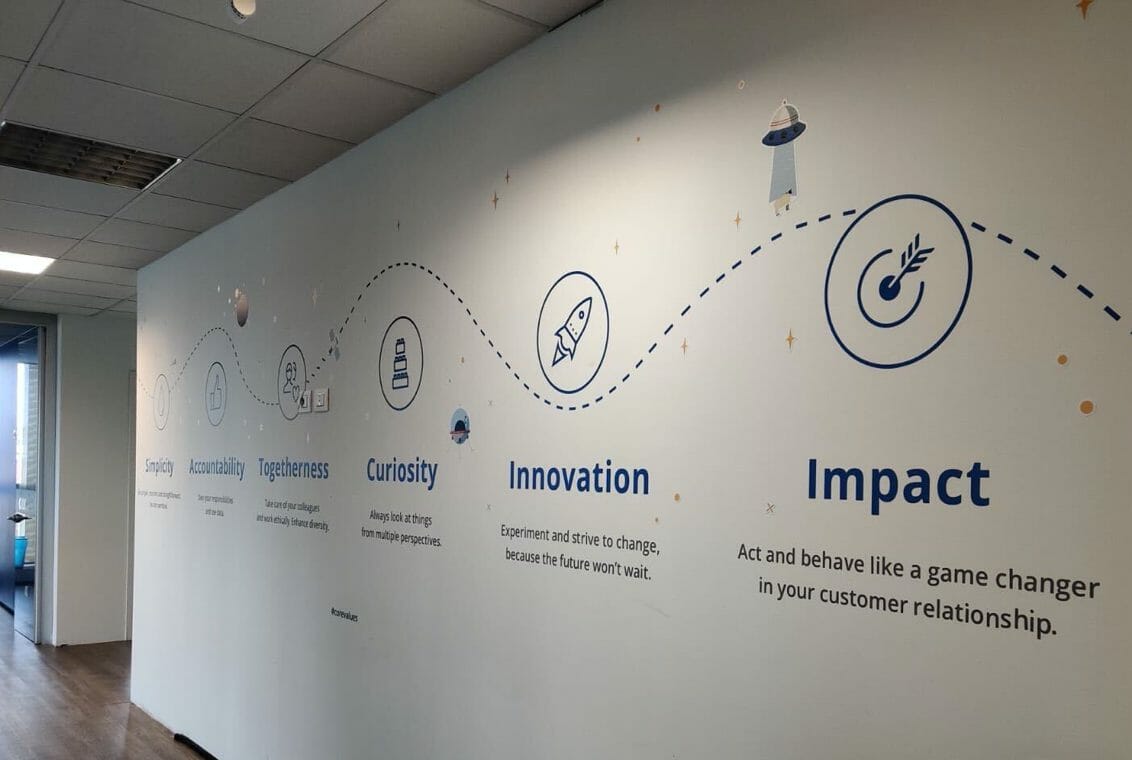 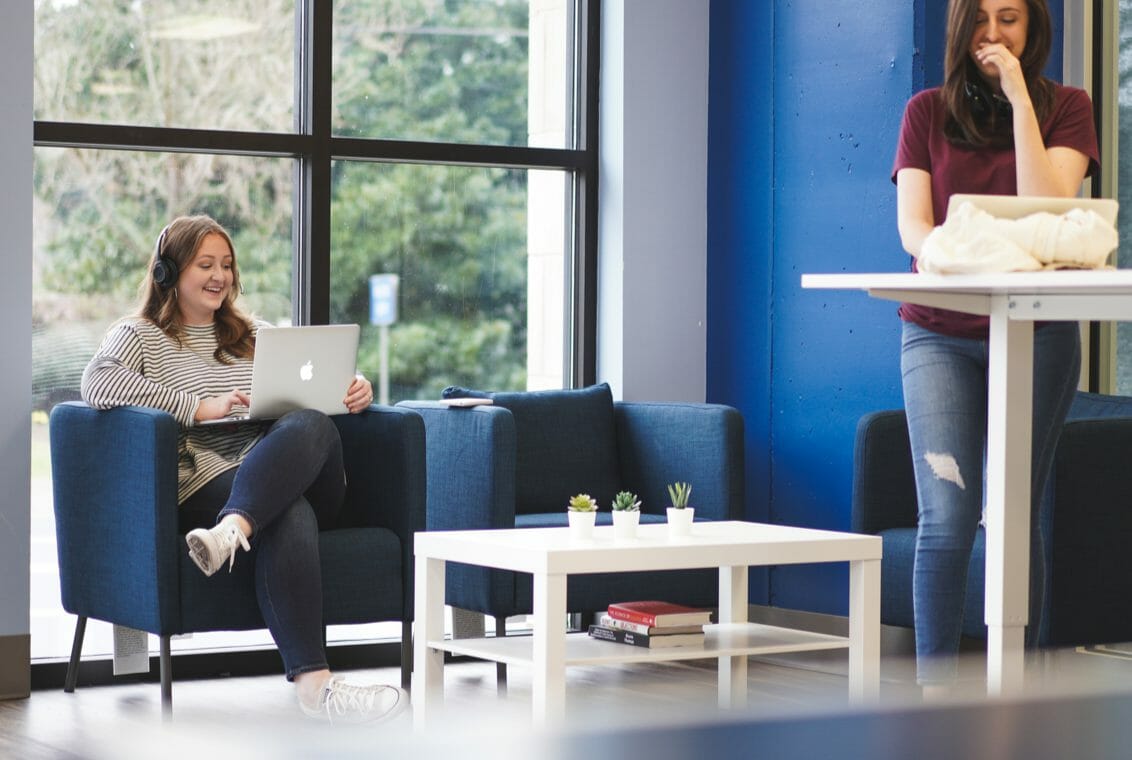 Docebo embodies the essence of six core values, simply defined and manifested in everything we do – from our people, to our product. More than ever in these times, we believe it is important to express our philosophy so we may inspire a better future through technology.

A simple and straightforward way of communication is part of our DNA. We approach our daily tasks by embracing simplicity, and without bureaucracy, using a problem solving approach.

We are do-ers and believe in empowering people. Owning our responsibilities is a way to grow and develop as individuals.

We take care of one another, and work ethically, recognizing our everyday efforts and celebrating our goals. We enhance diversity, equality, and inclusion.

We encourage people to persistently and instinctively seek new or existing data, question it, and use it to make more informed decisions. We embrace and encourage a can-do spirit, and the strong will to renew and improve.

We love to experiment and find new ways to do things. As innovators, we have to always think positively and progressively.

Partnering with our clients means understanding what they need, and finding solutions. We are driven by a constant effort to make a real measurable impact on their business, as well as to themselves as individuals.

Claudio Erba is the founder and CEO of Docebo, the leading global enterprise learning platform. Mr. Erba holds a degree in Economics and Marketing from the Catholic University of the Sacred Heart in Milan, Italy. In 2005, Mr. Erba used his experience as a guest lecturer on Content Management Systems at the University of Florence (2001 – 2004). Today, Docebo is the top cloud-based LMS AI platform of choice for organizations all over the world. Launching Docebo’s growth into the stratosphere isn’t Mr. Erba’s only passion – one day he wants to explore the galaxy himself and is patiently awaiting his chance to buy a ticket on Virgin Galactic (contact him if you know where to get them).

Alessio Artuffo is the President and CRO of Docebo and has more than 14 years of experience in the e-learning and knowledge management industry.

Previously, he was Docebo’s Director, International Business Operations from 2012 to 2013 and later, the Company’s Chief Operating Officer in North America.

Beginning in 2013, Alessio played an integral role in establishing the operations of Docebo in North America and has led Docebo’s sales and revenue efforts to date.

From 2007 to 2009, Mr. Artuffo was a Project Manager and later promoted to a Sales Engineer Manager at Giunti Labs, before it rebranded to eXact.

Mr. Artuffo is also on the board of advisors to Athensmade, Inc., a non-profit organization based in Athens, Georgia that exists to educate, support and promote homegrown brands, entrepreneurs and creative professionals.

Fabio Pirovano has over 15 years of experience in e-learning software development.

Mr. Pirovano has been with Docebo, in various roles, since 2005. He has been the Company’s Chief Technology Officer since 2012. Prior to this role, he worked with Mr. Erba to develop Docebo’s e-learning platform before being promoted to Team Leader of the Docebo LMS team.

Martino Bagini has over 15 years of experience as an investor and entrepreneur and has been the Chief Operating Officer at Docebo since 2018. Mr. Bagini currently serves on the board of Astella Investments, Ltda., a venture capital firm in Brazil. From 2010 to 2015, he served on the board of the Latin American company NVG Participações S/A (Navegg), a leader in big data, data management platform and analytics solutions. Prior to this, he was Managing Director (Brazil) and then promoted to Chief Operating Officer at RealMedia Latin America Ltda., an internet marketing technology and media company. From January 2009 to December 2010, Mr. Bagini served as a member of the board of the Brazilian National Self-Regulatory Advertising Body (CONAR) and prior to that, served as Vice President of the IAB- Interactive Advertising Bureau (Brazil) from January 2008 to December 2008. Mr. Bagini holds a Bachelor of Business Administration from Universidade Paulista in Sao Paulo, Brazil.

As CHRO of Docebo, a global leader in Enterprise Learning SaaS, Francesca has built the organization’s global family.

With over a decade of experience in e-learning, digital environments, and scalable processes, Francesca loves the challenges that come with high-growth, global expansion and supporting her people globally.

Francesca is a lover of technology, whose passion is fueled in her support of young women to understand their unlimited power. Her belief is that technology will rule the world, and women need to master it in order to be active actors in the new era upon us.

Rudy Valdez brings over 30 years of senior cloud and technology leadership experience and joined Docebo in August 2021. He spent the past 16 years at Amazon Web Services (AWS), where he helped to establish and build Amazon’s cloud computing business, founding the Sales and Business Development function within AWS just prior to its launch in 2006. Mr. Valdez most recently held the position of VP, Solutions Architecture and Training & Certification, where he focused on developing and sharing architectural best practices and helping educate millions of customers and partners in the AWS ecosystem on cloud technologies and approaches. Prior to joining Amazon, Rudy has held various software development, business development, and partner management positions at NASA/JPL, Xerox, Rational Software, and IBM. Mr. Valdez holds Computer Science degrees from UCLA and the University of Washington.

Sukaran Mehta serves as CFO at Docebo, where he’s responsible for building and leading the finance organization to support the strategic and internal execution of the company’s scaling and growth. Sukaran brings more than 15 years of experience in Technology, Financial Services, Private Equity and Venture Capital. Prior to Docebo, Sukaran was VP Finance at Finastra (a Vista Equity Partners owned financial technology company), overseeing key finance operations, including business planning, finance systems implementation, and recurring revenue operations. He previously worked at RBC on several finance initiatives, including the acquisition of City National Bank. Sukaran started his career at PricewaterhouseCoopers, is a graduate of the National University of Ireland, Galway and holds Chartered Professional Accountant CPA, CA Ontario and FCA Ireland designations.

Believe in change.
Grow with Docebo.